The Frist Humanitarian Award was founded in 1971 and honors outstanding individuals for humanitarian and volunteer services. Named in honor of the late Dr. Thomas F. Frist, Sr., founder of HCA and renowned humanitarian, this award recognizes individuals whose daily dedication and care giving epitomizes the highest standard of quality and personal commitment.

The awards are given annually to each HCA hospital. One recognizes an HCA employee who goes above and beyond day-to-day responsibilities and their overall service to the community. Another recognizes an HCA volunteer who gives unselfishly to patients within our facilities and the community. The third award recognizes a physician who best displays concern for the well-being of others beyond his or her day-to-day physician responsibilities, thus epitomizing Dr. Thomas Frist, Sr.'s commitment to the communities in which we serve.

Several physicians, employees and volunteers were nominated this year for this prestigious award. Physician nominees in alphabetical order are:

Employee nominees in alphabetical order are:

Local employee and volunteer winners receive $250 each. The physician winner receives a donation of $500 to the charity of his/her choice. Each winner will also receive a Frist lapel pin, a plaque, a front row parking spot or pass in the physician's parking lot for one full year, a beautiful large dish garden, and the individual's picture on display in the front entrance.

The hospital award winners go on to compete in the 2014 national Frist award. If selected as a national Frist award winner, they and a guest are invited to Nashville, Tennessee, where they will attend a reception in their honor by Dr. Tommy Frist, Jr., and other HCA leadership. They will also receive a bronze statue, a $5,000 gift to the charity of their choice, and a $5,000 cash gift. The physician recipient receives a $10,000 gift to the charity of his or her choice and a bronze statue. 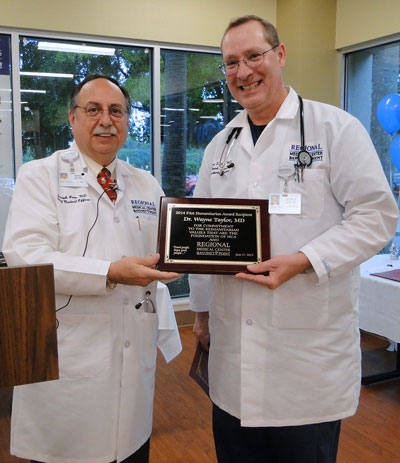 Dr. Taylor has a reputation for being thorough and considerate and taking time to be sure patients understand exactly what they need to do and what their options are. He is regarded as "a joy to work with" by the entire staff.

Dr. Taylor was a practicing internist in our community for almost 25 years when in 2010 he was diagnosed with acute mylocytic leukemia. He attended treatments that his disease required forcing him to leave his practice temporarily. He ultimately required a bone marrow transplant and fortunately responded to his treatment.

In 2012 he was well enough to begin work with the Leukemia & Lymphoma Society and to this day serves on their advocacy committee. In 2013 Dr. Taylor spoke and lobbied during the Florida legislative session for the Chemotherapy Parody Bill. This bill makes the co-pays for all chemotherapeutic agents similar to those co-pays for IV therapeutic agents, which historically are much less. Both in 2013 and 2014 Dr. Taylor has appeared before several healthcare committees as a patient advocate and a physician cancer survivor using his knowledge as a physician and his experience as a patient to successfully benefit patients with cancer by giving legislators his unique perspective of the disease.

In 2014 he became the Leukemia & Lymphoma Society's patient representative to the Food & Drug Administration's Oncological Drug Advisory Committee. Also in 2014, Dr. Taylor attended Congressman Gus Bilirakis' CURES 21st Century roundtable talks. He spoke in support of Congressman Bilirakis' efforts to streamline the process of getting new cancer drugs for the diseases where outcomes have not improved for the last 20-30 years. In addition to being the Wound Care Medical Director, Dr. Taylor also volunteers at the CARES Claude Pepper Free Clinic for indigent patients 55 years of age. 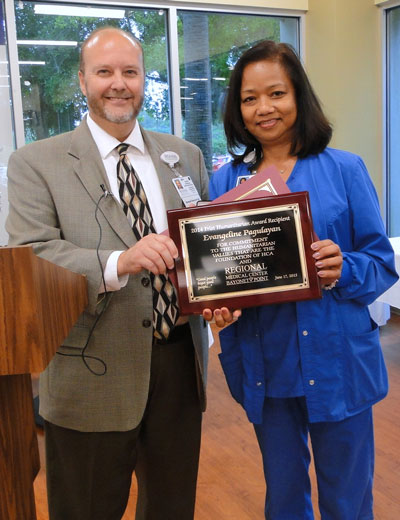 Vangie Pagulayan came to the United States in 1981 from the Philippines. She was planning to continue her nursing profession in the USA. She started at Regional Medical Center Bayonet Point in 1982 - 33 years ago. Ms. Pagulayan is the PACU coordinator (Post-Anesthesia Care Unit). This unit is the recovery for all patients who have been given anesthesia for their surgical procedures at Regional Medical Center Bayonet Point and is a very vital unit to the hospital and its reputation in the community.

Vangie has a reputation as a model for the nurses who work with her. She is compassionate and caring and meets all needs as much as she is able for the patients she cares for as well as the staff she works with. Patients who awaken from anesthesia are generally confused, in severe pain and frightened. Vangie makes an extra effort to be sure that the care and comfort levels of her patients are a priority and insists her staff work this way also. Her unit is well staffed with excellent experienced nurses with little turnover of staff.

The surgical physicians have confidence in Vangie and her nursing staff and that their orders will be followed correctly. Vangie has little time for outside activities due to the demands and hours her hospital duties require. However, she is an active member of the local Filipino Club and participates in fund raising for needy Filipino citizens in their country and in the United States. She is an active member of her church and participates in charitable occasions that the church sponsors. She also offers personal help if needed to any of her staff. 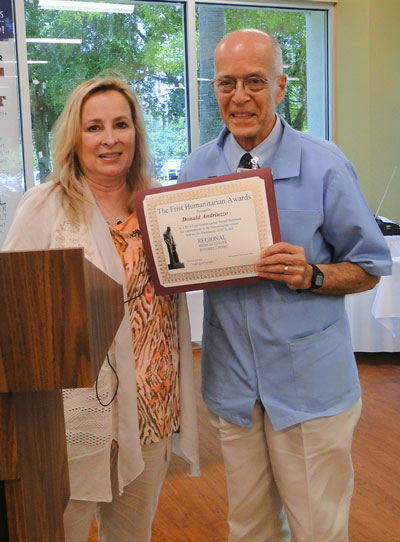 Donald began volunteering in 1994 and has accumulated 31,328 hours of service. He serves as the chairperson of the mailroom couriers and has a reputation for deep respect for all the men and women working with him. He was instrumental in establishing the mail delivery route in the hospital and is responsible for the training of each mail courier. In addition to his chairperson's responsibilities he has also volunteered throughout the years in any special project in which he was asked to participate.

Because of Donald's excellent writing skills he is the ghost writer for many volunteer award applications presented to him, which range from Five Star, Volunteer of the Year, and Frist Awards. During his many years as a dedicated volunteer he has been recognized for the Five Star Award as well as Volunteer of the Year. In 2010 he was the recipient of the prestigious Presidential Lifetime Achievement Award, which comes directly from the President of the United States and recognizes outstanding volunteers for both their many years of service and accumulation of hours.

Donald has also volunteered at HPH Hospice where he accumulated 1,148 hours. Donald has a reputation at HPH Hospice of always being ready and available to visit with veterans and participating in a ceremony for patients who are veterans.

Donald is a war veteran himself and feels strongly about supporting each and every one of the patients he is called upon to visit both at HPH Hospice and at Regional Medical Center Bayonet Point.